A new device aimed at helping in the recovery of people with COVID-19 shows promising results, says one Mississippi doctor who has been using the device. Dr. Brian Rifkin, a nephrologist with Forrest General Hospital in Hattiesburg who is working with pulmonologist Dr. Steven Stogner, said the Seraph 100 Microbind Affinity Blood Filter has helped most of the patients who have received the treatment as part of their recovery.

“We have treated 17 patients to date,” he said in an email. “Twelve have been discharged, four are still hospitalized and one died of complications unrelated to COVID or Seraph treatment.”

In general, it only takes one treatment, which lasts four to six hours, to begin seeing results, Rifkin said, with patients beginning to see improvement in the first 48 hours after treatment.

Treatment is similar to dialysis

The filter works similar to dialysis, which removes blood from a patient, filters it and reintroduces the cleansed blood to the patient’s bloodstream.

“A dialysis filter has pores to remove waste and water from the body in a patient with kidney failure,” Rifkin said. “The Seraph filter, in contrast, has coated beads that bind various particles. It was initially being studied to remove bacteria from the blood in patients with sepsis due to a trend in increasing antibiotic resistance. The pandemic hit, and it was theorized that the filter could bind other infectious agents including viruses.”

That theory proved to be right.

“They did a preliminary study that did indeed show that the levels of SARCOV2 did decrease when filtered through the Seraph in a laboratory setting,” Rifkin said.

He said the filter is attached to an existing dialysis machine, which means hospitals already equipped with dialysis machines would not have to purchase additional equipment or training. 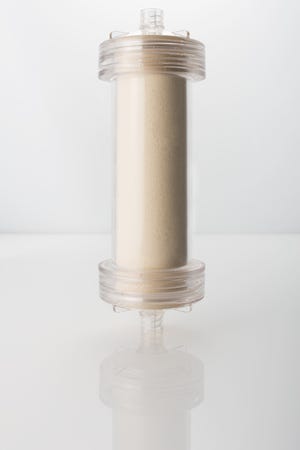 The Seraph 100 Microbind Affinity Blood Filter offers doctors a new way of treating patients with COVID-19. Forrest General in Hattiesburg, Miss., is one of the hospitals successfully using the treatment. Weinberg-Clark Photography/Special to The American.

Risks must be weighed with benefits

While the device has many benefits, Rifkin said there are still risks to using it, so the hospital made the decision to use it to treat the most critically ill.

“The FDA’s EUA (emergency use authorization) does not specify which patients can be considered,” he said. “It is our feeling that the risk/benefit makes the most sense in patients who are declining clinically. There is risk of bleeding, additional infection (like bacteria introduced into the blood), drops in blood pressure (hypotension), an allergic-type reaction to the filter and potentially even death.

“Patients with more mild disease should not be exposed to such risk.”

Rifkin said he was introduced to the Seraph 100 in the summer, when former Gov. Phil Bryant dropped off samples of the Seraph filters to hospitals throughout the state.
Bryant is a partner in the Bryant Songy Snell consulting firm.

“During the first surge in July we were seeing a large number of younger patients die from the virus despite all conventional treatments (decadron, remdesivir, and convalescent serum),” Rifkin said. “Dr. Stogner and I felt the potential benefits of the Seraph filter outweighed the risks, particularly in critically ill patients.”

In an article published in July, the National Institutes of Health reported promising results but further exploration is needed.
“Seraph-100 use may improve hemodynamic stability in coronavirus disease 2019 cases requiring mechanical ventilation and vasopressor support,” the report says. “These findings warrant future study of a larger cohort with the addition of mortality and total hospital day outcomes.”

One clinical trial to evaluate the safety and performance of the filter is set to begin in February and should last until mid-April. Another clinical trial, Purify OBS-1, which launches Thursday will observe those who have already been treated with the Seraph 100.

“This treatment is currently being studied for its efficacy,” Rifkin said. “(Forrest General) hopes to be one of 10 centers in the U.S. to be enrolled in the PURIFY study which is specifically looking at these filters. Because we do not currently have any completed scientific studies to reference, all we can say is our experience is positive but anecdotal.

“For this reason, the Seraph filter is only used after all conventional treatments that have been rigorously studied have been exhausted.”

Device could have wider use after studies completed

The hospital is currently using the treatment under an emergency-use authorization from the Food and Drug Administration.

“After proper study it is possible the Seraph will find wider use,” Rifkin said. “It was released for EUA because of the current critical situation we find ourselves in with COVID. It is foreseeable that this filter could be used for a number of different types of blood infections in the critical care setting.”

While much of the focus has shifted from treatment to the newly released vaccines, the need to treat patients is still high since hospital beds and intensive care units are full to capacity in most areas of the state.
“We are grateful to have the opportunity to have any additional therapies to help our critically ill patients,” Rifkin said. “I do believe that we have made a significant impact on patients who would have otherwise died from COVID. Hopefully the work we have done and the data we are collecting will be of further benefit to other patients as well.